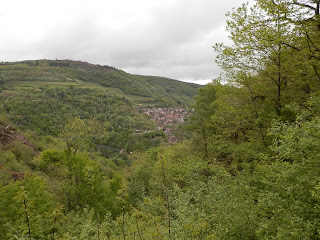 I just returned from doing the Le Puy route from Le Puy to St. Jean, walking from late September to late October. I am a medium to fast walker and it took me 30 days of walking to make the trip. I did not take a full day off but did take two short (10K) days as rest days.
I walked the Frances last year from St. Jean to Santiago, also in 30 days. I walked alone both times.
Observations and comparisons:
I've been asked "which one is better?" Or which did I "like most"? Wow, difficult to answer. They are different. The Chemin is in many ways prettier and wilder than the Camino. You will walk on more real single track and through gated pastures and generally be alone more than on the Camino. There are a lot less pilgrims, though I did meet many great people. Spain is more open, more pilgrims, more camaraderie, bigger albergue dinners with people from all over the world. France has fewer and smaller towns, as Spain has Pamplona, Burgos, Leon, etc. to walk through. Spain feels sweeping and epic, France feels more intimate and quieter.
The food in France is generally better and the gites are generally a little nicer, though I had some misses in both departments in France. France is 20-30% more expensive than Spain.
I'd say physically France is tougher, especially at the beginning, with days that have multiple steep climbs on loose rocky trail surfaces. Pack as light as you can.
Culturally, the biggest and most obvious difference is simply that France and Spain are different countries. The French "bon jour" to me symbolizes French attitudes toward others. It is initially quite formalized and structured. You say "bon jour". Period. Not "Salut" or "hello". "Bon jour". You say it to everyone, including the lady behind the counter at the patisserie, the guys standing at the bar when you walk in, to people riding by on bikes. Bon jour. Once to each person. You say "auvoir" when you leave, even leaving shops or bars. "Auvoir", or the equivalent "a bientot", etc. To not do so is rude. Spain, at least to me, is more casual and closer to what we are used to in the US. "Ola" or "buenos dias" but more flexible and casual. You can walk out of a bar or shop without saying goodbye. At least that is my observation. In France, if you sort of "follow the rules" and get off on the right foot, people are lovely and helpful, much like Spain.
A little French-speaking capability goes a long way. My French is absolutely terrible, but seemed to be appreciated, at least for being amusing, and once people see you try, it often turns out they speak more English than they initially let on.
The Chemin de St. Jacques is absolutely beautiful, with Disneyland-level quaint towns, especially the celebrated Le Puy to Conques portion. It does have a camino feel but lower-key. I can recommend the Chemin highly but can't say it is better than the Camino Santiago. They are different and I feel so fortunate to have been able to do both.
buen camino,
John
Indsendt af Jakobsvejen kl. 16.27